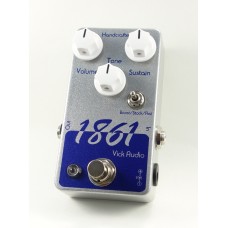 View basket
Category Fuzz pedals
Vick Audio’s newest addition to its Tau lineup of classic reproductions guitar pedals the 1861 gives tribute to the Civil War model fuzzes produced in Russia in the early 90’s.  These fuzz pedals were nicknamed the Civil War model because of the distinctive blue and grey color scheme used on its graphics.
While all early Tau forefathers essentially used the same circuit with changes to the parts values, the Russian produced lineup in the early 90’s had a unique set of values that were different than the earlier Triangle and Ram’s Head versions.  Those Russian models were known for their great low end, smoothness and lower gain.
The 1861 is an excellent choice for anyone that values great bottom end, needs more gain than the Black Russian and Green bubble fonts provide but also want more smoothness then the Triangle or Ram’s Head.  This pedal works well with both guitar and bass.  As with all Vick Audio Tau series pedals a switch has been added for three mid-range options scooped (stock) as well as flat and boosted mids.
FEATURES